Today Chad’s former dictator Hissène Habré heard the verdict that he was found guilty of crimes against humanity, murder and torture after a five-month trial that took place in Senegal’s capital Dakar. The court sentenced Habré to life imprisonment and confiscated his goods. A victim’s testimony.

It took 26 years, but Chadian torture survivor Souleymane Guengueng testified at the trial of his former dictator Hissène Habré. Without him, the landmark trial would not have taken place. He was instrumental in gathering the evidence. For years, he with the other victims, their lawyers and international NGOs, like Human Rights Watch, sought Habré’s prosecution for crimes committed during his rule in Chad from 1982 till 1990. A Chadian truth commission estimated there were tens of thousands of victims.

This trial before the Extraordinary African Chambers (EAC) in Senegal is the event of the year in international justice. For the first time, the courts of an African country have tried a former leader of another African country. The EAC could act as an alternative to the International Criminal Court in The Hague, which has lost credibility in the eyes of many Africans. 96 victims testified before the EAC in Dakar. 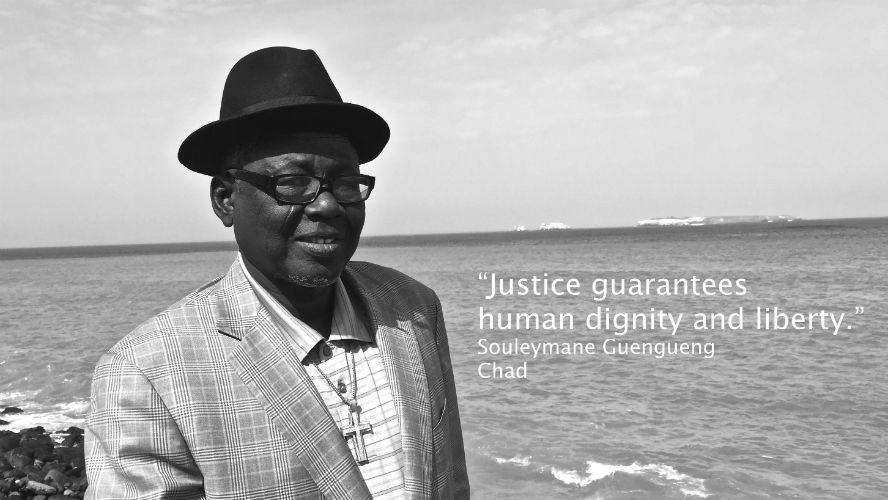 Souleymane Guengueng was a lower functionary when he was picked up by Chad’s political police in August 1988, wrongfully accused of working for the political opposition. For Guengueng, 67, wearing thick glasses after almost losing his eyesight in prison, it has been an emotional trial.

“For us, this is a victory, because who could believe that Habré, who was seen like an untouchable God in Chad, could be judged? It is really a victory for us and for me personally too. We know that with all the evidence we brought forward, Habré deserves perpetual imprisonment. But even when Hissène Habré ends his life in prison, it does not pay for his crimes. For us, the trial serves as a lesson for other dictators, for all those in power, especially in Africa, to no longer commit the crimes that their predecessors did.

“I nearly died in the prisons of the secret police of Habré, where I spent 2.5 years. They put me in overcrowded cells, where I saw cellmates die and be tortured in front of my eyes. I swore that if I would come out alive, I would fight to bring Habré to justice. Immediately after being freed, I started to collect and organise the testimonies of the direct and indirect victims. This documentation has formed the basis of our case.

“The most important part of my testimony before the court on 19 November 2015 was really giving evidence. To not just talk, but show. I even showed tangible evidence of material. Even eating tools that I made in my cell. I showed the scars on my head. I quoted colleagues who died and others who were mutilated, some of whom have testified as well. There were shocking testimonies, including of four women who were deported to serve as sex slaves. To me and many of the victims, it served as a remedy to speak in front of the judges. It was liberating. Even though Habré didn’t say a word in court, hiding under his white turban and behind sunglasses, he had to listen to all our testimonies. There were many testimonies that made clear that it is really a miracle that people got out alive. And if god operates these miracles it is because this situation should not pass unnoticed. It is for the whole world to know what happened in Chad during the regime of Habré.”

“Today is a great day for me, because Hissène Habré was convicted. But my quest for justice won’t stop here. On the contrary. I want to help people all around the world, people who seek justice, who want my advice on how to pursue a case, no matter where they are. I am ready to share my experience. I want to create a website and a foundation for this purpose.

To victims who seek justice I say you need courage, a lot of courage, hope and a long breath. As you persist, others will follow you. When you keep silent no one will know what happened to you, that you have been violated or tortured. No one. One has to take down the barrier of fear. Fear will automatically change sides when you seek justice. The one who has done you wrong, it is he who will be afraid to face justice. And even when people try to threaten you, it is better to say “Kill me, I’m not going to give up.”

Souleymane Guengueng fled to the United States in 2004 after serious threats from Habré’s accomplices. Also the lawyer of the victims’ association, Jacqueline Moudeina escaped assassination when a grenade was thrown at her during a demonstration, ordered by one of Habré’s former security officials who had still held on to his post.

“It has been a long road to justice. There were several attempts at prosecution that failed. We went from filing for prosecution in Senegal in 2000, where Habré was living peacefully in exile since he fled Chad, to Belgium because it has universal justice and then back to Africa to the Economic West African States (ECOWAS) and finally again to Senegal. After, Macky Sall, a new president had been elected, who accepted to pursue Hissène Habré and create the EAC, with the help of the African Union, the Extraordinary African Chambers was created.”

“If one thing is clear to me after all these years is that ordinary people can bring their dictator to justice.”