Gambia’s search for the truth

At the launch of the Gambia’s Truth, Reconciliation and Reparations Commission (TRRC), a group of children aged 7-13 years old used drama to tell stories about transitional justice in The Gambia.

The new body is tasked to investigate and establish an impartial historical record of the nature, causes and extent of the violations and abuses of human rights committed from July 1994 to January 2017. So, many of those children weren’t even born when those abuses were happening. But still, they know. And they felt.

This was a period when, in the words of the Minister of Gambia’s Minister of Justice, Aboubacarr Tambadou, fear ruled: where mothers dreaded that midnight knock on their doors which took away their sons and husbands forever; where civil servants went to work every morning saying goodbye to their families as if it was the last time they would see them ever again because coming back home to them was never a certainty; where torture was routine; where unarmed school children were gunned down in broad daylight; where women under detention were sexually molested and where sexual assault was used as a weapon to break and subjugate them; where summary executions and targeted murder were an option without consequences; and where ordinary citizens speak of their leaders only in whispers within the four walls of their bedrooms.

This was the period nowadays referred to as the “dark history” in The Gambia: the smallest country on mainland Africa that endured 22 years of tyranny under a dictator, Yahya Jammeh. Former President Jammeh came to power in July 1994 as a 29-year-old military Lieutenant, leading a group of four other Lieutenants in a coup that brought an end to a 30-year civilian rule. The country had been seen as a champion of peace and human rights in Africa after gaining independence from Britain in 1965.

When Adama Barrow led a coalition of opposition political parties against Jammeh in 2016 presidential elections, one of the key promises he made to the population was to probe crimes committed under the 22-year rule of now-exiled Jammeh. 21 months into office, the newly-minted TRRC was sworn in at its secretariat in Kanifing, a popular coastal suburb that lies immediately west of the capital Banjul.

One young girl of about eight held the mic at the opening and screamed for help out of frustration for the long-suffering she’d endured as a result of the abuse her grandparents endured. In March 2009, President Jammeh sanctioned a witchhunt in villages across his home region that saw up to 1,000 being abducted and detained for up to five days. They were forced to drink concoctions in order to “confess” to witchcraft. Some were severely beaten and at least two died. The young girl’s story of her family’s shame was the subject of her cries.

In the drama performed by ‘Children for Transitional Justice’, she was being calmed by a lad of about 12, limping on one leg in a half-bent posture. He was ‘a journalist’ who had been tortured, including by being electrocuted, for covering and reporting on a political rally in 2006. Through the drama, they narrated their stories as victims and their yearning for truth and justice. 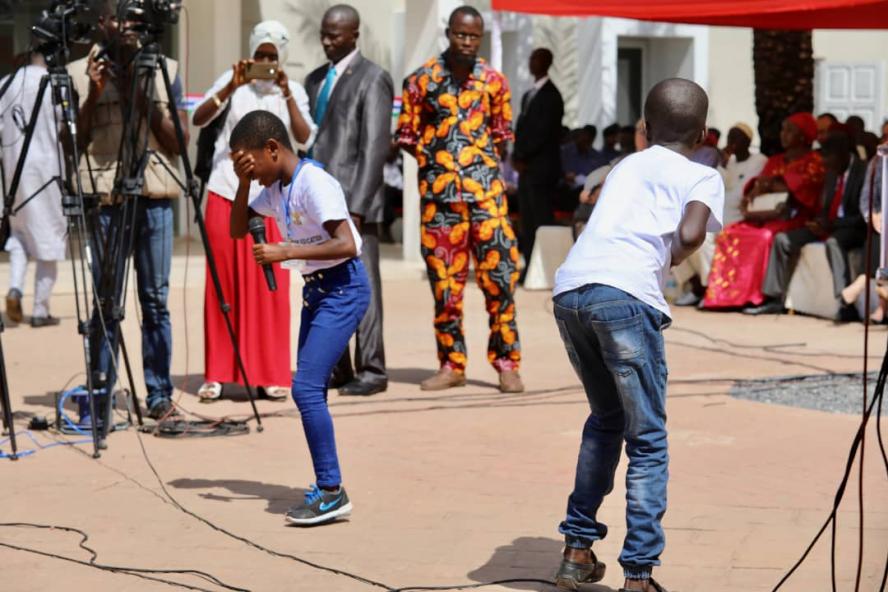 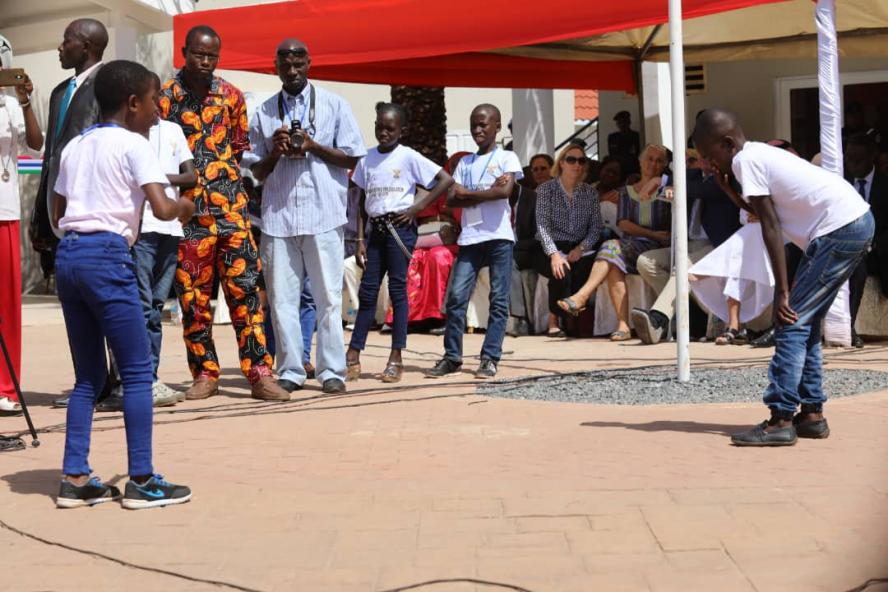 Their stories moved some members of the audience to tears including the Minister of the Interior and the Chief Justice of The Gambia Hassan Bubacar Jallow – a former prosecutor for the International Criminal Tribunal for Rwanda (ICTR) – who had to cover his face to avoid his tears being seen publicly. In the crowds, others used their handkerchiefs to wipe theirs too. In the crowd were representatives from the UN, the Prosecutor of the ICC, diplomatic reps and families of victims, President Adama Barrow and his cabinet, speaker of the National Assembly and other dignitaries. 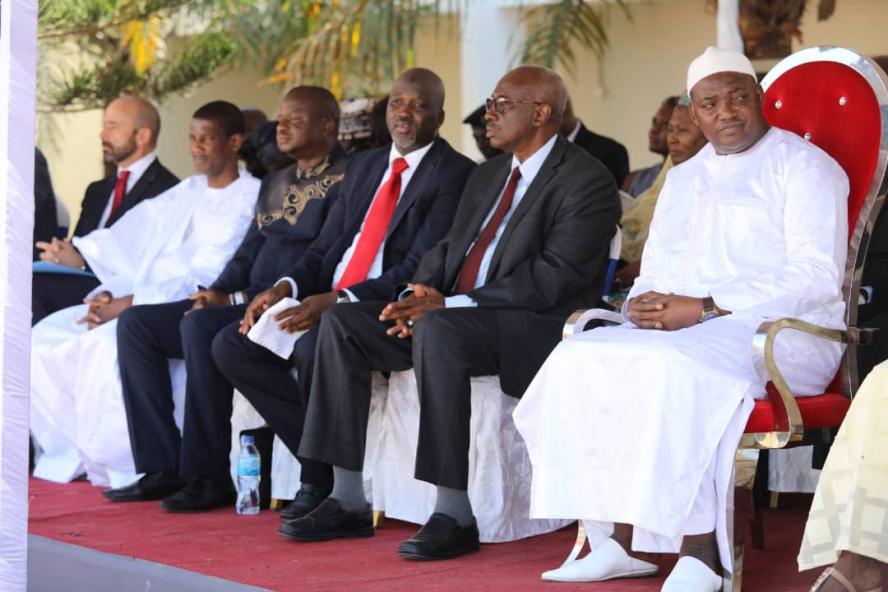 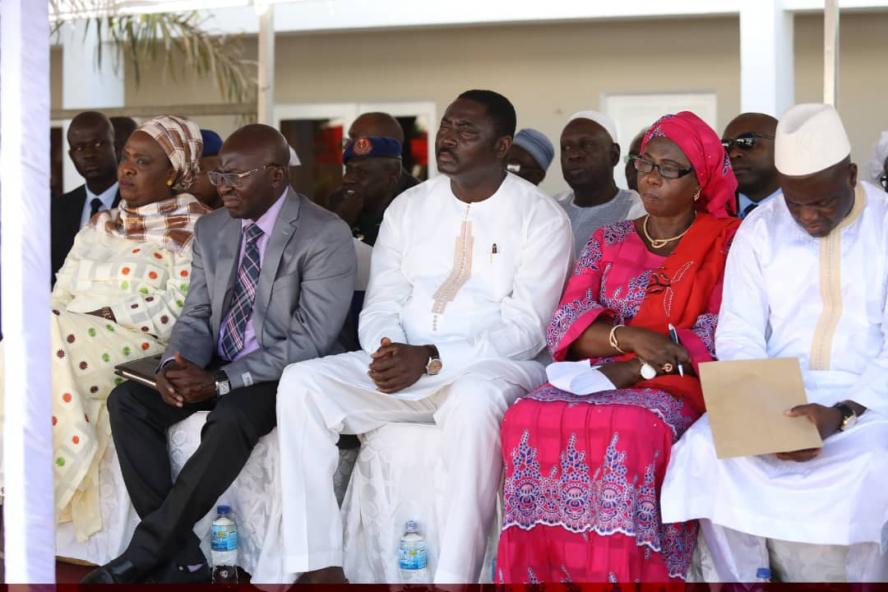 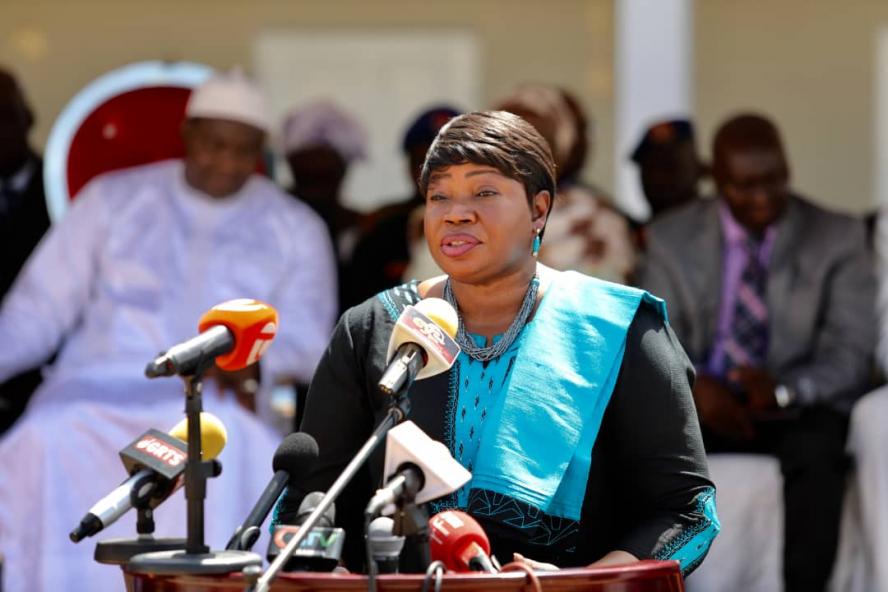 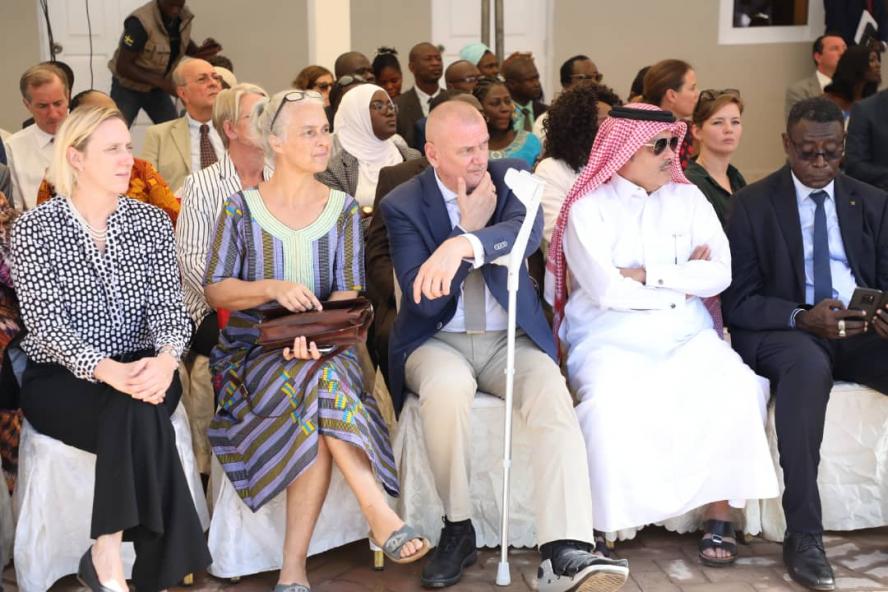 “We must not fail the children,” said the chairman of the TRRC, Lamin J. Sise, who had just taken his oath of office, in a statement afterwards. Mr Sise has served in the UN Legal Office, and as chief of staff for former Secretary General, Kofi Annan. These roles had enabled his involvement with TRCs in South Africa, Cote d’Ivoire, Kenya, Cambodia and Nepal. 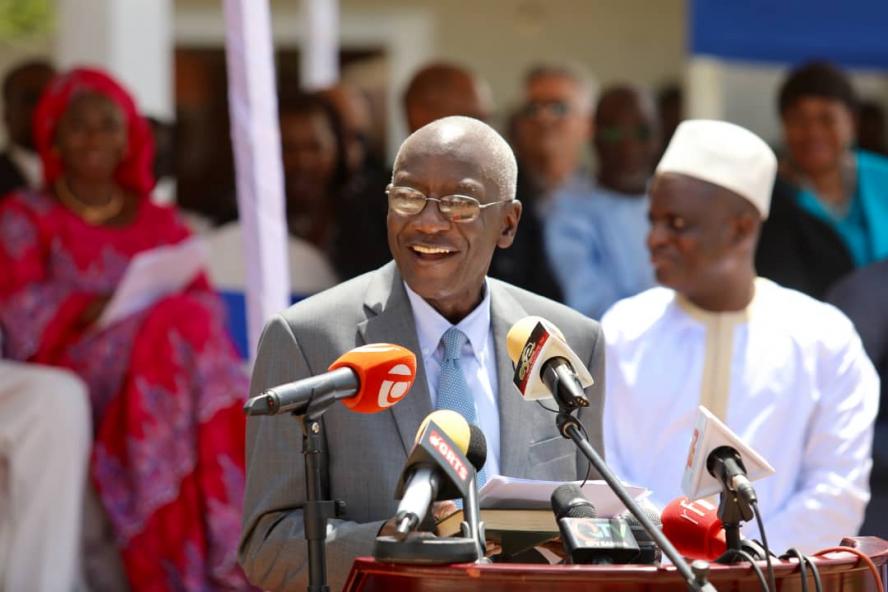 Other members of the Commission include the Deputy Chairperson Ms Adelaide Sosseh, a veteran civil society advocate in The Gambia, and representatives from all the regions of the country and the diaspora and all the five major ethnic groups. They will make recommendations to the President after the completion of their work in the next two years. 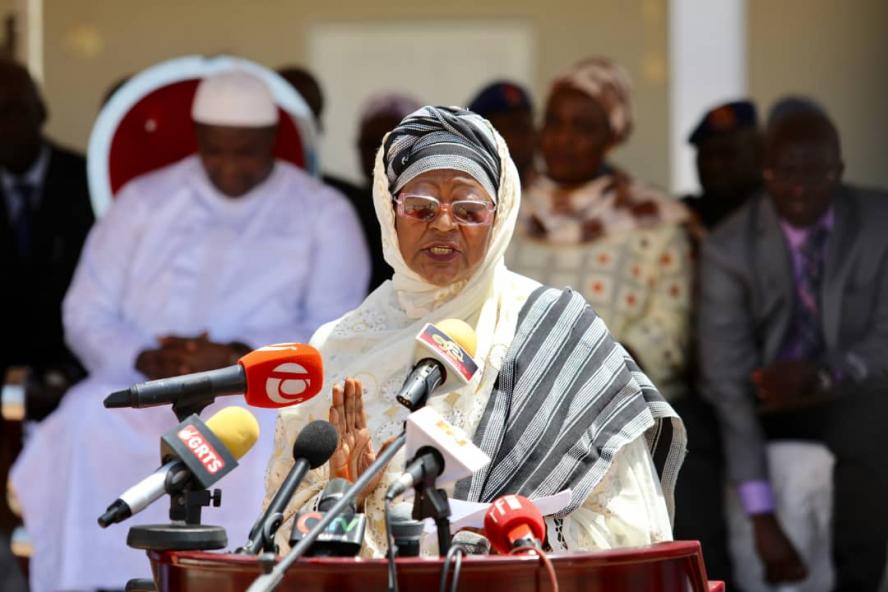 President Barrow in his launching statement reminded the gathering that naturally, the TRRC would hold different meanings for different people; be it the State, the perpetrators, the victims, or the families of either group. To the State, the TRRC would serve as an opportunity to embark on a process of rebirth and healing. To the victims, it provides an opportunity to establish the truth with regard to what they went through. For the perpetrators, it provides an opportunity to come clean, face their victims and seek forgiveness, he explained. 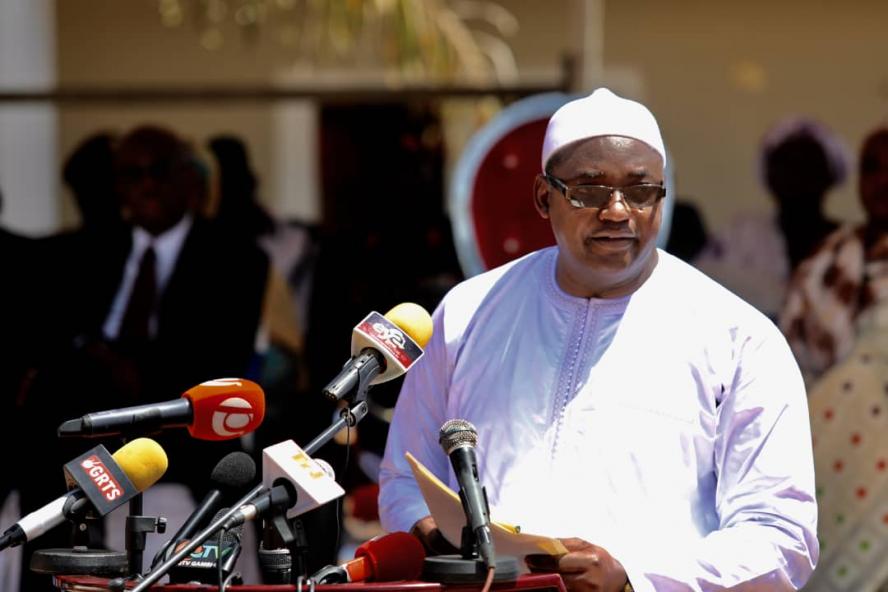 “For the families of either the victims or the perpetrators, the moment may present itself for them to come to terms with the reality of the brutality committed by, or against, their loved ones. Irrespective of whichever it may be, we must forge on resolutely as one people, united in our diversity, with the common belief that we can set aside our differences and confront our past while holding on to the promise of a bright future,” he said.

To the TRRC Chairman Sise, the children represent the future. He acknowledged that they have sent a message to the authorities.  “How can anybody see those children, the message that they send, and then fail them?” he asked. 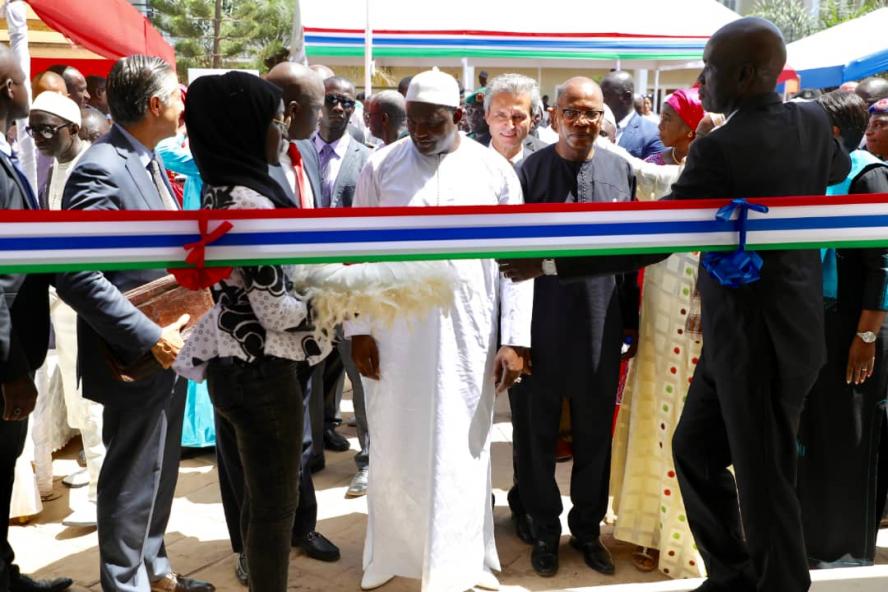 Sanna Camara left the Gambia in 2014 after his investigative work as a journalist forced him to flee government threats. He now works as a Media Officer in the Office of the President of Gambia

How do We Create a Path to Justice in Yemen?

On July 1 2019, the Iranian Center for International Criminal Law (ICICL)  filed a communication under Article 15 of the...

Victim Fatigue in the case of Thomas Kwoyelo

Calling Sexual Violence What It Is: Advancing the accountability agenda

Victimhood and Responsibility for Forced Sterilisation in Peru

Sanna Camara left the Gambia in 2014 after his investigative work as a journalist forced him to flee government threats. He now works as a Media Officer in the Office of the President of Gambia