Ayman Ghoujal is a Syrian activist, who is now a refugee living in the Netherlands. In this “My Justice”, he talks about war, persecution and his work for the Violations Documentation Center.

“I lived on the outskirts of Damascus. I was working with a small Syrian human rights agency, just collecting ideas for demonstrations. The area where I was living had become a frontline in the clashes between the Free Syrian Army (FSA) and Syrian government forces. It was very dangerous.

“I had to run away. I paid two thousand dollars at the border just to get my name off the list of people who cannot leave.

“My daughters are 11, 6 and 5. They knew why we had to leave. Even now, my older daughter cannot sleep alone. She is afraid. For months, every day we could hear the fighting.

Now I work with the Violations Documentation Center (VDC)

“I’m working daily to document war crimes and human rights violations committed by all the parties in Syria. I’m specialised in making videos, so I’m watching all the footage that comes out of Syria. I sometimes make reports about people in prison and their relatives.

“The VDC was established in 2011, when the revolution started. It was opened by Razan Zaitouneh, a lawyer and well-known humanitarian activist. We have activists inside Syria who send all the data, pictures, names and videos. We also have members in Turkey, Egypt, the Netherlands and some other places.

“We analyse the material. We write the names and every specific detail about everybody who was killed: who killed the person, how, and every other relevant detail about each and every single case. This is our way to prepare for the next stage, for a trial or something like this.

It is very hard to deal with this every day

“Some days, you see your friends or relatives in videos. One of our crew members saw her brother in some of the footage.

“I don’t think there is a single Syrian family who has not experienced this. You can imagine how many thousands of people we don’t know about, who died and are lying under the buildings that get bombed.

“It is a horrible thing. We are now in the 21st century, and if you see these scenes… This is happening every day in Syria, and nobody is doing anything. It is very shameful for humanity that – with so many non-governmental organisations, the ICC and all this stuff – nobody can do anything for Syria. There is a lack of political will to deal with Assad.

“The other problem is that everybody wants to fight ISIS, for some reason. ISIS is just a gang with rifles and some machine guns. And this doubles the trouble for Syrians because some areas are ruled by ISIS, some by the FSA, some by the Kurds and others by the Syrian regime. It will become even more complicated in the future.

From what I’m seeing there’s no hope

“This is why you are seeing all these refugees. The Syrians have just lost hope that this war will end some day. They know there’s no solution, and they are choosing to move. One day maybe they’ll return, but you’ll see even more Syrian refugees in the future because there’s no solution.

“It has always been like this. The regime started in the 70s. It came by force and became a dictatorship. It’s something like North Korea. You cannot talk. You cannot argue. Under Syrian law, the government can arrest anybody and put them in jail. No questions asked.

“If you write something that’s considered controversial, you’ll be imprisoned. This is why I spent time in jail because I wrote about the revolution on my Facebook page. It was just news. I took pictures of a demonstration, wrote about how peaceful it was, and how the police and army came and shot people. They came to my house and arrested me. This is very usual, very normal in Syria. You go to jail, you get beaten and if you’re very lucky you get out. 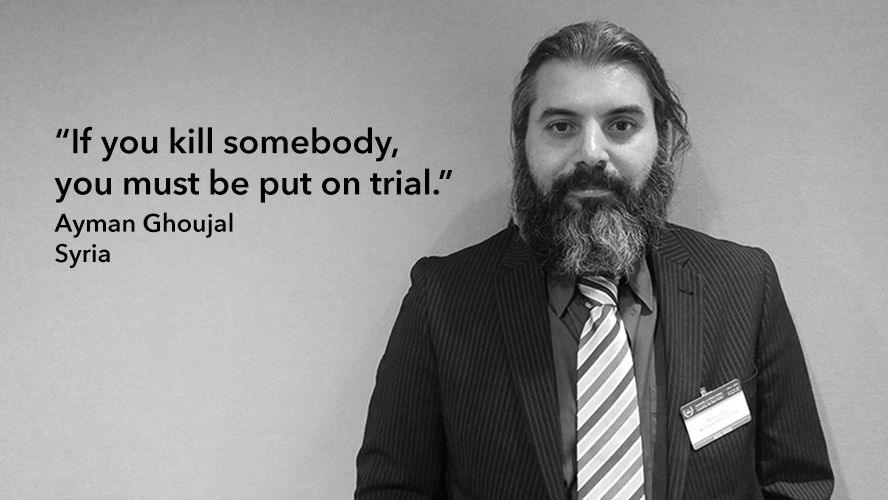 My idea of justice is very normal

“Assad must be put on trial together with the rest of his regime. I think everybody now knows that he is killing people on a daily basis. He has used chemical weapons, and now he is using chlorine gas. Every day, two to three hundred people are killed in Syria.

“If you kill somebody, you must be put on trial. But it’s really difficult to do this, with this regime.

“I think Syrians will heal from this. It will take years, but the Syrians can do that. If you remove the main problem, it will be very easy for the country to heal.”